The Samsung Galaxy J7 may be more important to Samsung than its flagship phones this year. Why? As the J series is the best selling smartphone series in India, Samsung claims. Mid-sized and affordable devices constitute a high volume, low margin market, attracting the highest demand in India. As a result, the Samsung Galaxy J7 is currently entering the most competitive segment of the market in the country, competing with some of the most popular smartphones.

Samsung relies on brand equity and broad reach to sell it, which is a sensible strategy as the brand arguably has the largest network among smartphone makers in India. That said, the competition is catching up and the Galaxy J7 isn’t the ideal performer you’d want to buy.

As part of Samsung’s new design philosophy, which started last year, the J7 has a metal frame with plastic on the back. It is currently one of the few phones in the entire market that allows you to remove the battery. The dual-4G SIM slots and micro-SD slot are all housed in the back, in addition to the 3000 mAh battery. The power button is on the right side, right where your thumb would land. The volume rocker is on the left side of the phone, while the speaker is on the back. The Galaxy J7 isn’t one of the loudest phones out there, and with the speaker on the back, it’s still cumbersome.

It is a utilitarian design to say the least. The Samsung Galaxy J7 looks and feels like a cheap phone. It costs Rs. 15,999, automatically placing it alongside phones like the OnePlus X, Gionee Marathon M5, Lenovo Vibe S1, and more. All of these look more premium than the Galaxy J7 while many of them are even available in the offline market.

The Samsung Galaxy J7 lacks that new phone feel, even if you’ve just unpacked it. We bought the gold unit and it looks too mundane. Yes, looks are subjective, but I don’t see many people liking the look of the J7. 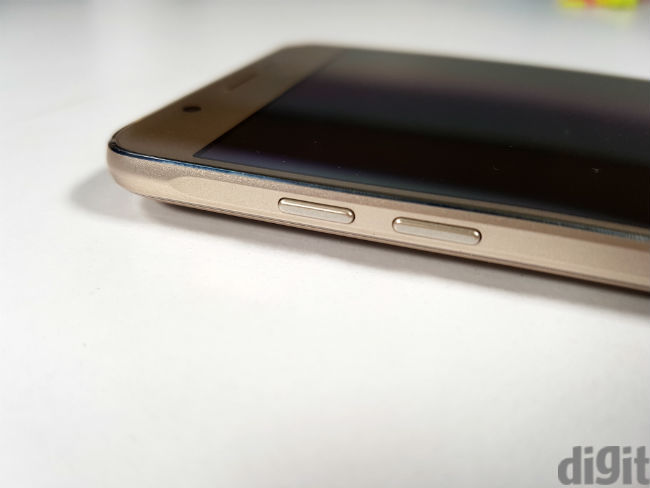 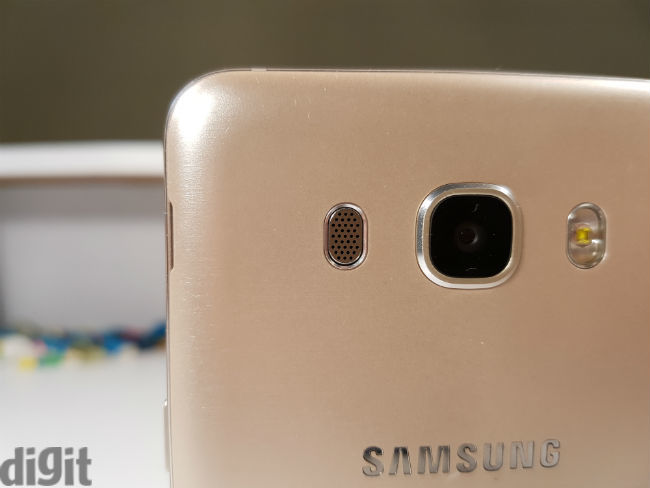 From a construction perspective, the Galaxy J7 is not shabby. There are no unwanted creaks and it is built sturdy enough. However, it is not an ergonomic device. The dimensions are a bit too big, at least for people with small hands.

If there’s one thing Samsung has done well over the year, it’s the screen. However, there is a snag here. If you’ve been using smaller screens, such as those on sub-7K Android devices, you’ll find this to be an upgrade. Choosing between this and a Moto G4 Plus is immediately noticeable because of the lower resolution. The Samsung Galaxy J7 comes in at 267 ppi, against the pixel density of 401 ppi of the Moto G4 Plus or Xiaomi Redmi Note 3.

With the colors it is still very beautiful. The Super AMOLED screen doesn’t over-saturated as much as you’d expect, and the viewing angles are fine. Interestingly, the screen is still somewhat reflective and sunlight visibility isn’t the best. Compared to a Gionee Marathon M5, which also has a 5.5-inch 720p AMOLED display, colors look more punchy, thanks to less reflection.

I am also dubious about the touch response of the screen. The smooth and premium feel of Gorilla Glass is missing.

The Exynos 7870 is also one of the better elements of the Galaxy J7, in itself of course. If you compare side by side, with a Snapdragon 650 powered Xiaomi Redmi Note 3 or a Snapdragon 617 with Moto G4 Plus, you will be disappointed. Simply put, the Galaxy J7 can handle most games and heavy tasks satisfactorily, but the loading times are higher. That said, in general gaming you’ll be hard pressed to really find a noticeable difference unless you’re playing heavy games for extended periods of time.

The Galaxy J7 is also quite good at heat management. In an air-conditioned room, with a temperature of about 23-25 ​​degrees, the phone never goes above 3-37 degrees, even at the highest clock speeds.

However, where it is really lacking is in memory. The Galaxy J7 has 1.5GB of RAM, half of what most of its competitors have. Loading apps from memory will slow down over time as the phone keeps closing apps in the background too often.

Like the Samsung Galaxy J5, the 13MP camera of the J7 is also not what we expected from Samsung. This isn’t a flagship, of course, and it would be wrong to expect an S7-like camera, but we expected better.

In daylight outside, the Galaxy J7 will do just fine, as long as it’s bright and sunny. But even partially less light, and images deteriorate drastically. Images lack sharpness and details, and noise increases further in low light. To be clear, there are worse phones out there, but if you’re on this price budget, the Gionee Marathon M5 can do a lot better.

The Samsung Galaxy J7 is large, displays a lower resolution screen, and is quite underpowered. All this results in an enormous battery life. On the Geekbench 3 battery test, the phone lasts well over 16 and a half hours. With regular use, you can easily get a whole day of battery life and much more from the Samsung Galaxy J7. If you use Samsung’s commendable Ultra Power Saving mode, this phone can last even more than two days, for lighter users.

Unfortunately, the battery life isn’t enough to recommend a phone. Plus, even with its massive battery life, the Galaxy J7 can’t outperform the Gionee Marathon M5. That phone lasts even longer.

The Samsung Galaxy J7, like the J5, is below par and cannot match the competition. The Xiaomi Redmi Note 3 and Moto G4 Plus provide much better battery life than this device, while the Moto phone also has a better camera. If you need battery life, the Gionee Marathon M5 would be our pick.